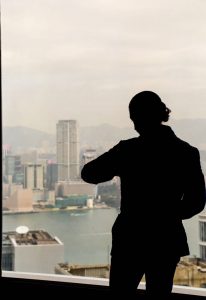 As someone who has a high appreciation for fine craftsmanship, it would only be natural that Osama would develop a very strong interest in the watchmaking world after his first exposure to it in 2012.
To him, the thought that so many tiny parts could mesh together, harmouneously, in such a tiny space to measure the concept of Time was absolutely mesmerizing. He recalls that although his family had no general interest in mechanical watches, his first encounter with a mechanical timepiece did bring back to his memory something his uncle (a watch enthusiast) mentioned to him many years prior, “Think of the idea that someone will spend 5 years working on a bench trying to make just one watch and then you will understand the art behind it.”
A short year into his enthusiasm and he discovered the works of Francois-Paul Journe in a moment he would come across by complete chance. Exactly three seconds into trying on his very first Journe and Osama knew it was something special. It was a moment of chance that would later turn into a part of who he was.
Under the belief that passion is not about collecting and learning, but rather it is about sharing; Osama decided to launch an Instagram account in 2015 to contribute and share his thoughts and journey with other enthusiasts.
As the page reflected his passion, he found himself dedicating much of his posts to whatever he knew and could share regarding, more specifically, the world of Journe; something that would later have enthusiasts simply refer to him as, The Journe Guy.
Besides blogging, Osama is also a watch consultant and curator and his greatest joy is in introducing and assisting other enthusiasts into adding a watch to their own personal collections.